"I crumple the sides of the cold red clay,

And warming it gently in my hands.

I fill with light, with meaning and love

Breath of grass and the song of tit,

As a child that will be released soon on the road

Blessed by the fire and prayer."

Rishtan is one of the oldest cities of Central Asia of the manufacture of ceramics. For 1100 years, from generation to generation masters of the city pass the secrets of unique ceramic products. The traditions of ceramic art by the end of the 20th century were almost lost in many ceramic centers and only in Rishtan and in this is its phenomenon, the craft was rapidly developing, retaining its stylistic integrity. The feature of Rishtan ceramics in its pattern and totally unique varnish, which is called "ishkor", so the pottery is often called ishkor.

An award-winning master of ceramic cases, bright representative of the traditional Rishtan’s school,the honored member of arts of Uzbekistan Bakhtiyor Nazirov agreed to become our guide to the world of traditional ceramic school of Rishtan. 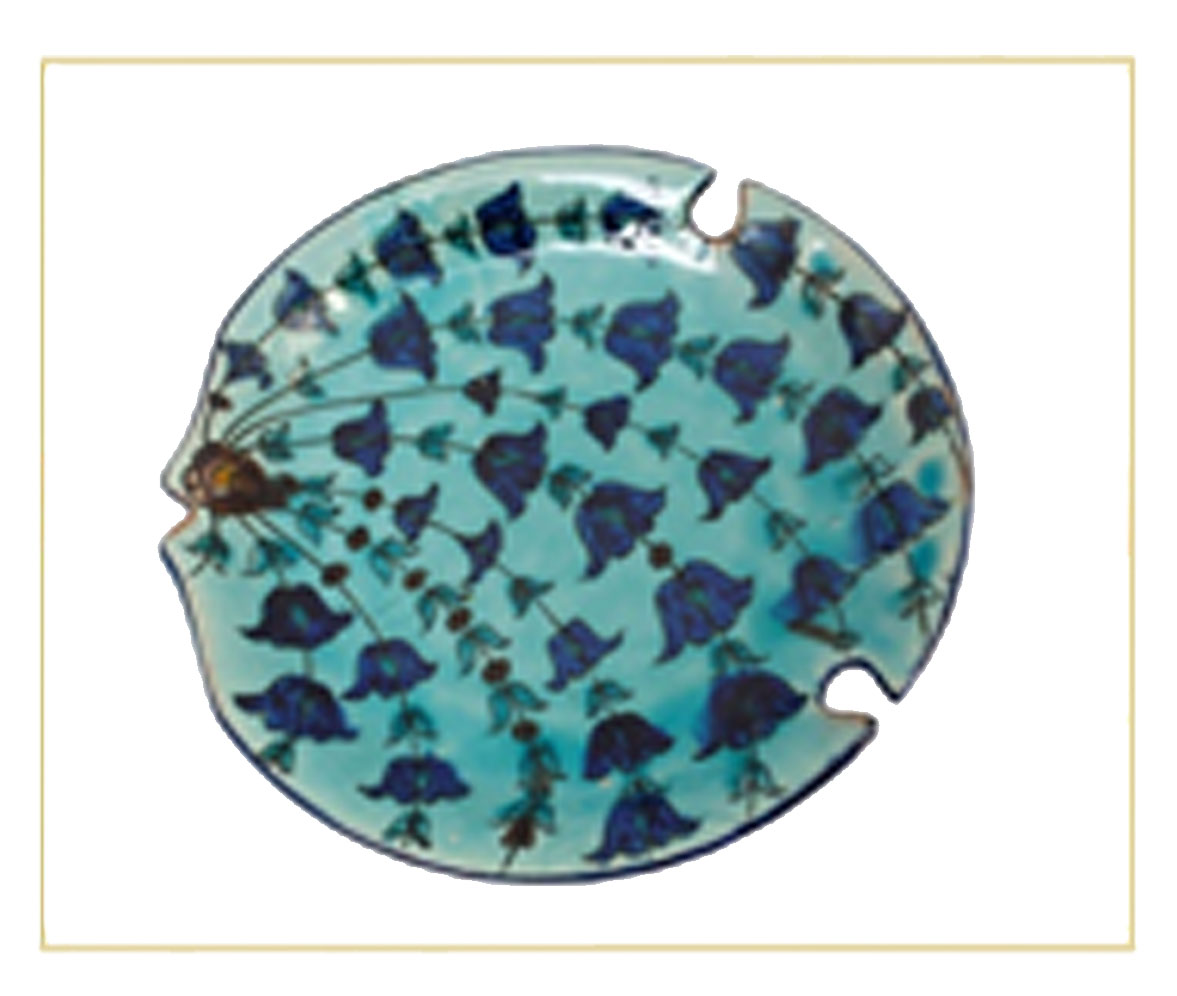 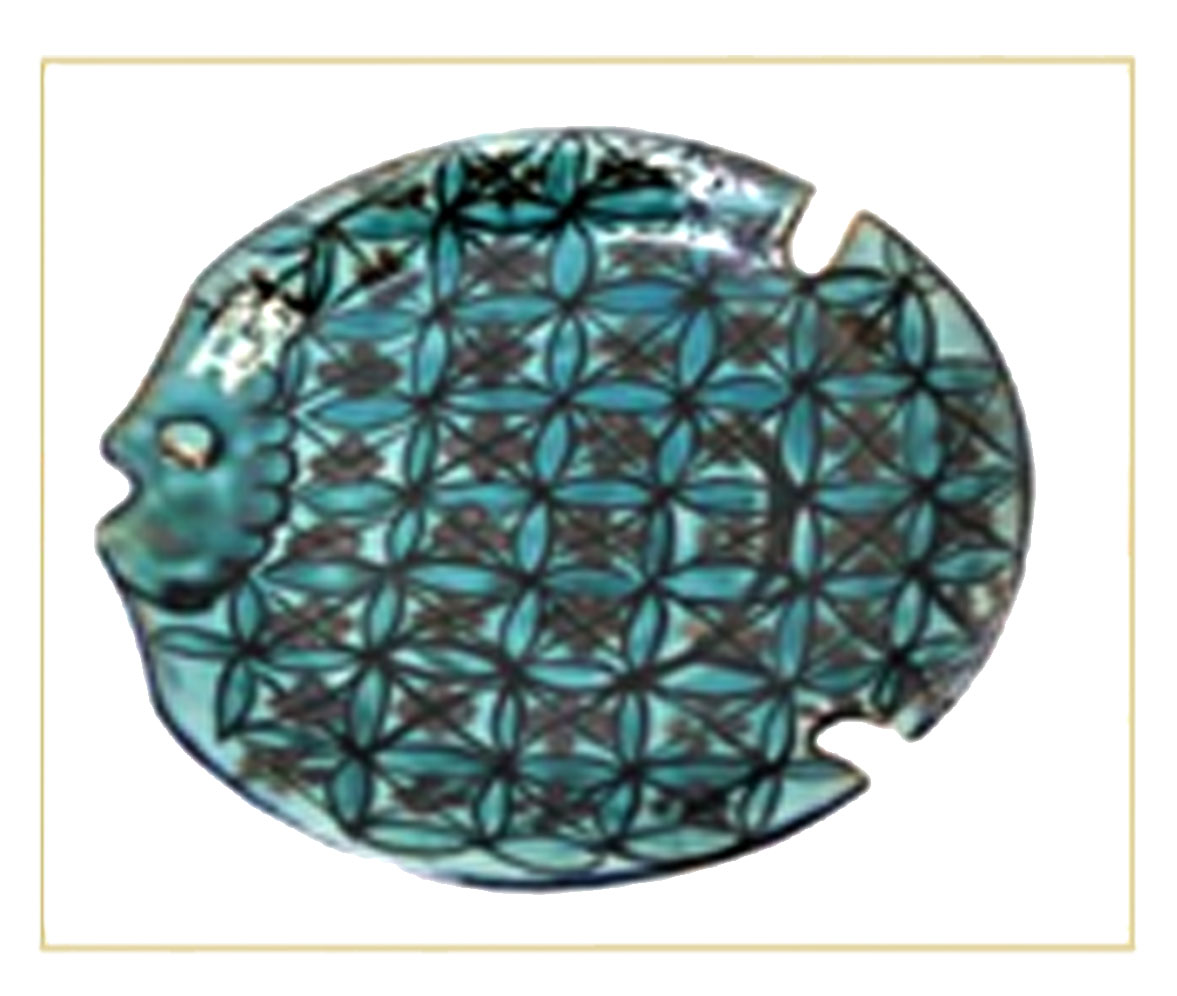 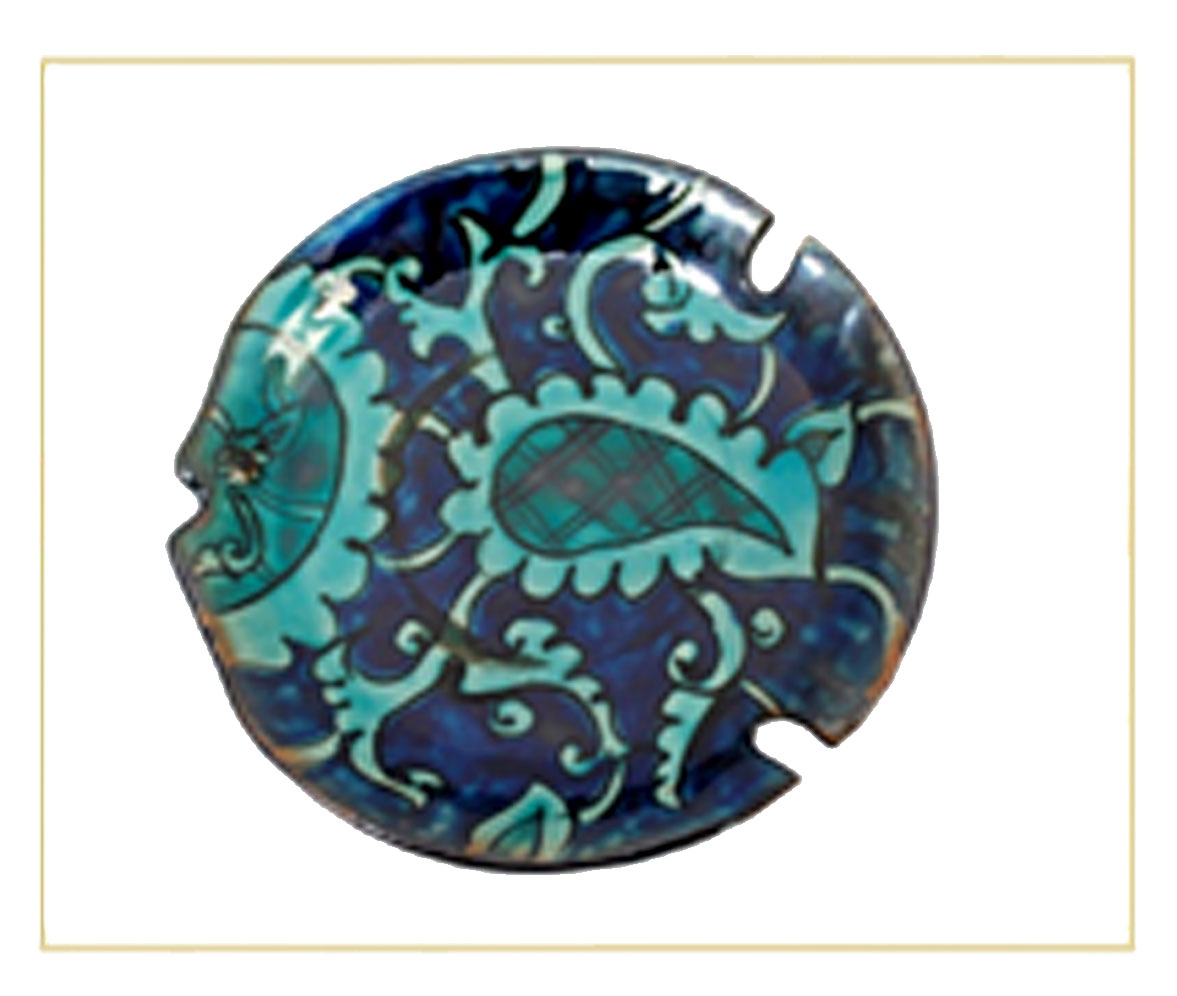 Once he was "shogird" - apprentice of his older brother Alisher Nazirov, award-winning master of ceramic cases. The way of Bakhtiyor Nazirov to mastery began as a boyish effortlessly. One day, little Bakhtiyor decided to trace where every day with unconcealed pleasure rushing his elder brother Alisher. Reaching in the footsteps of his brother to the ceramic workshop Bakhtiyor did not come out from there more. Having learnt all the skills of making ceramic pottery to the strictest canons, Bakhtiar began his own professional career.

Now about the secrets, traditions and the strict regulations ruling in the "ceramic" world from the words of master Bakhtiyor Nazirov.

B. N. - Ishkor is the plant that is the basis for traditional Rishtan glaze. We also called "fortyroots". The unique of ishkor is that Uzbekistan is the only place in the world where it is grown and used for making glazes for ceramic ware. 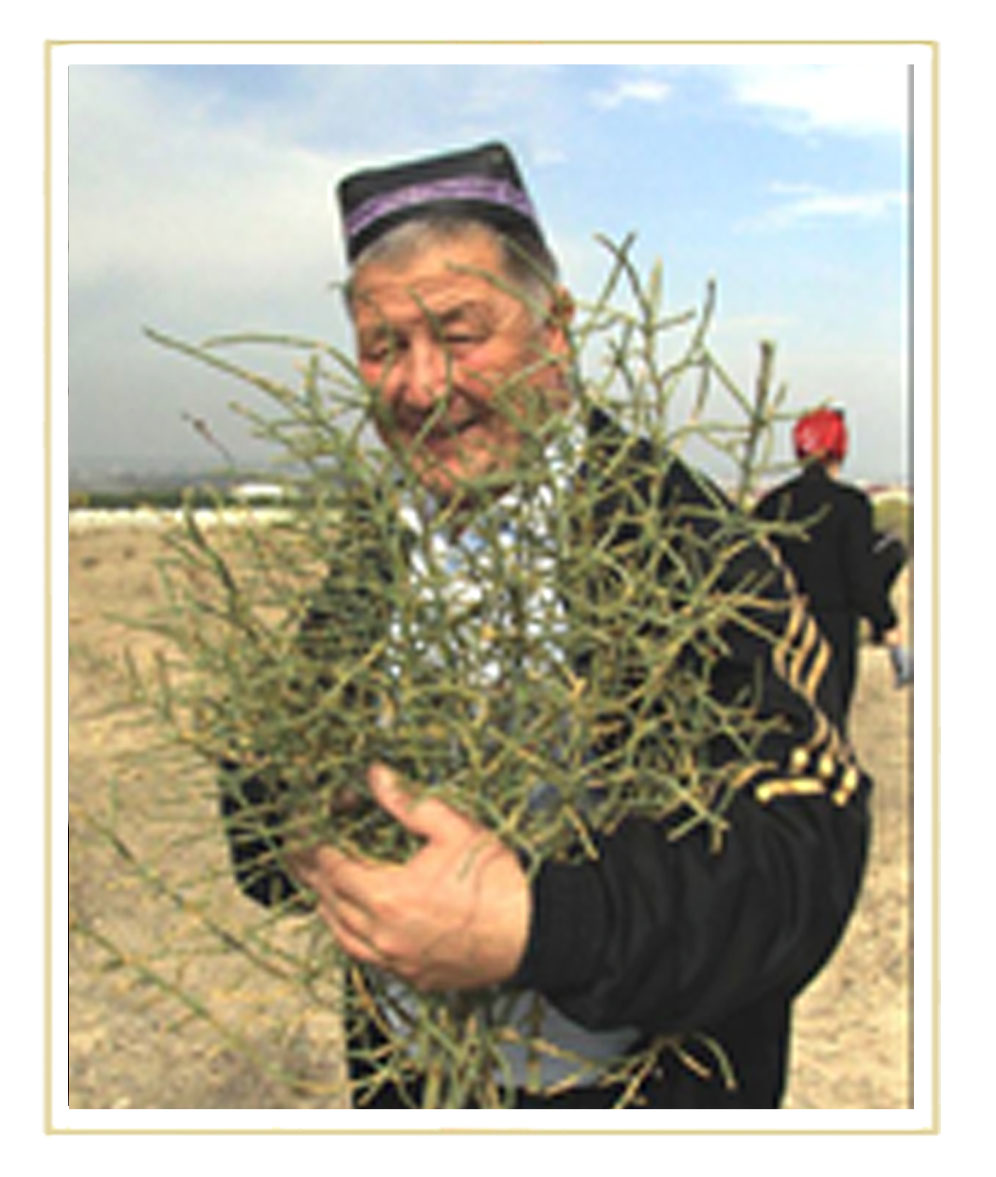 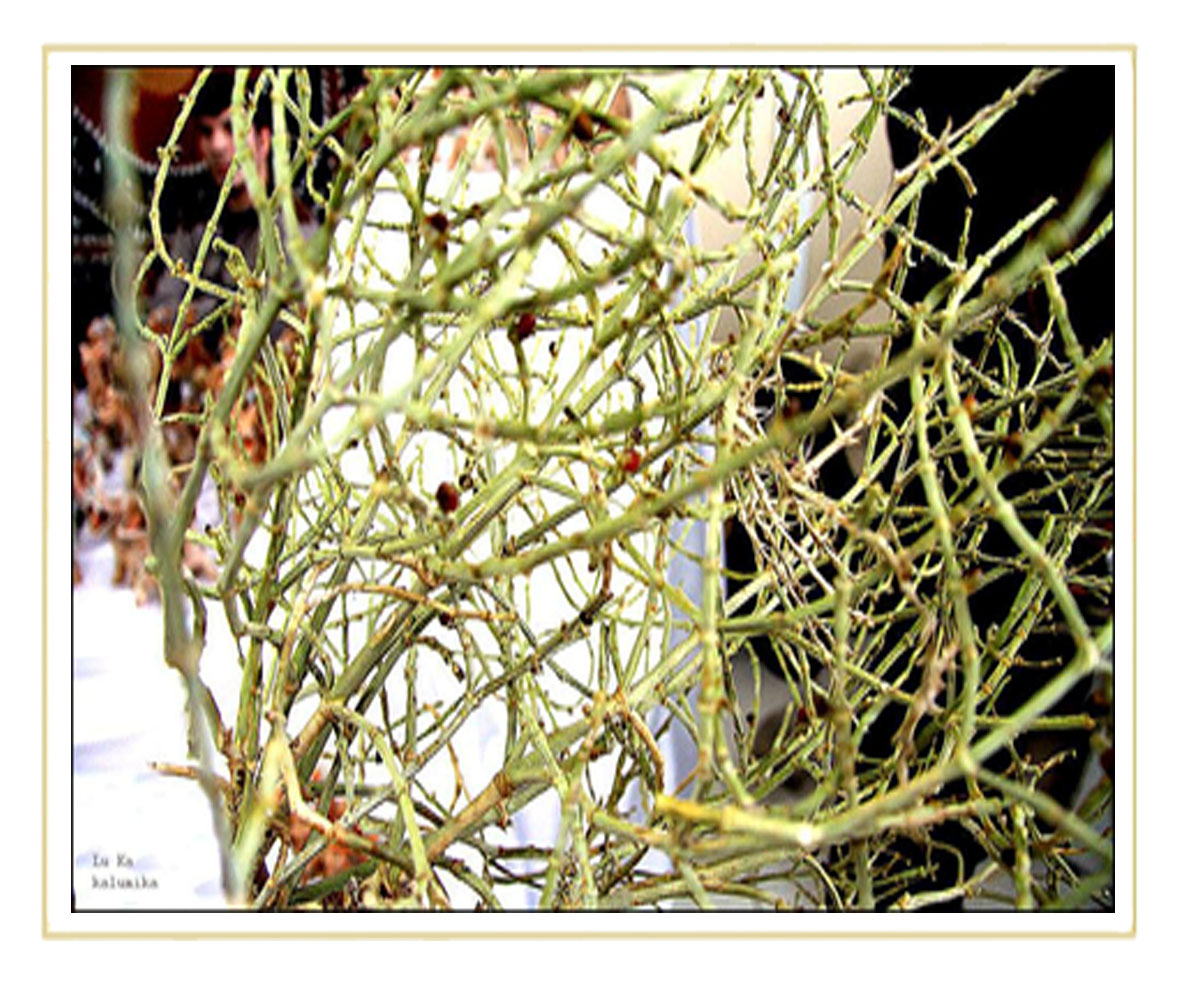 We collect ishkor at the end of September. There, on the field we are converting the plant into ashes. All packaged in bags and sent to the master. Already in the workshop ash is burned again in the oven "gundam" at a temperature of 1200-1300 °t , thereby bringing the ashes to the crystal state. After roasting, we again grind the resulting powder. Then, in thispowder, we add the required amount of quartz sand, a little the most ordinary flour and one unusual element-crushed river stones. These white stones we collect from the bottom of local river Sokh when the water gets low in it. Of course, each master has his own secrets in the preparation of glazes. But, this is a big  secret.

- What colors are typical for Rishtan’s tableware?

B. N. - We add cobalt in the ishkor mixture if we are to get the turquoise, azure and blue colors. Adding copper, we get the green, manganese – the brown. And if we add the hardware, we will have a yellow color.If ishkor nothing is added, you get a classic white color. Lets talk about a pewter color, which is obtained through the use of tin. It is tin ceramics was widely used in the decoration of architectural constructions in the era of Amir Timur. Due to the use of tin ceramic tile became hardier, and it was necessary that the facades and inner halls after centuries have preserved its beauty. It is important to note that in the manufacture of ceramic ware with the addition of tin, you must use it only in certain doses. For us there is the concept of "food tin", that is, permissible substances for use in the manufacture of pottery. What the dishes were beautiful but if for its creation were used not permissible for human health proportion of dye, the game is not worth the candle. As you can see not enough to be a master - creative person, you must take responsibility for the whole process and be a competent technologist. 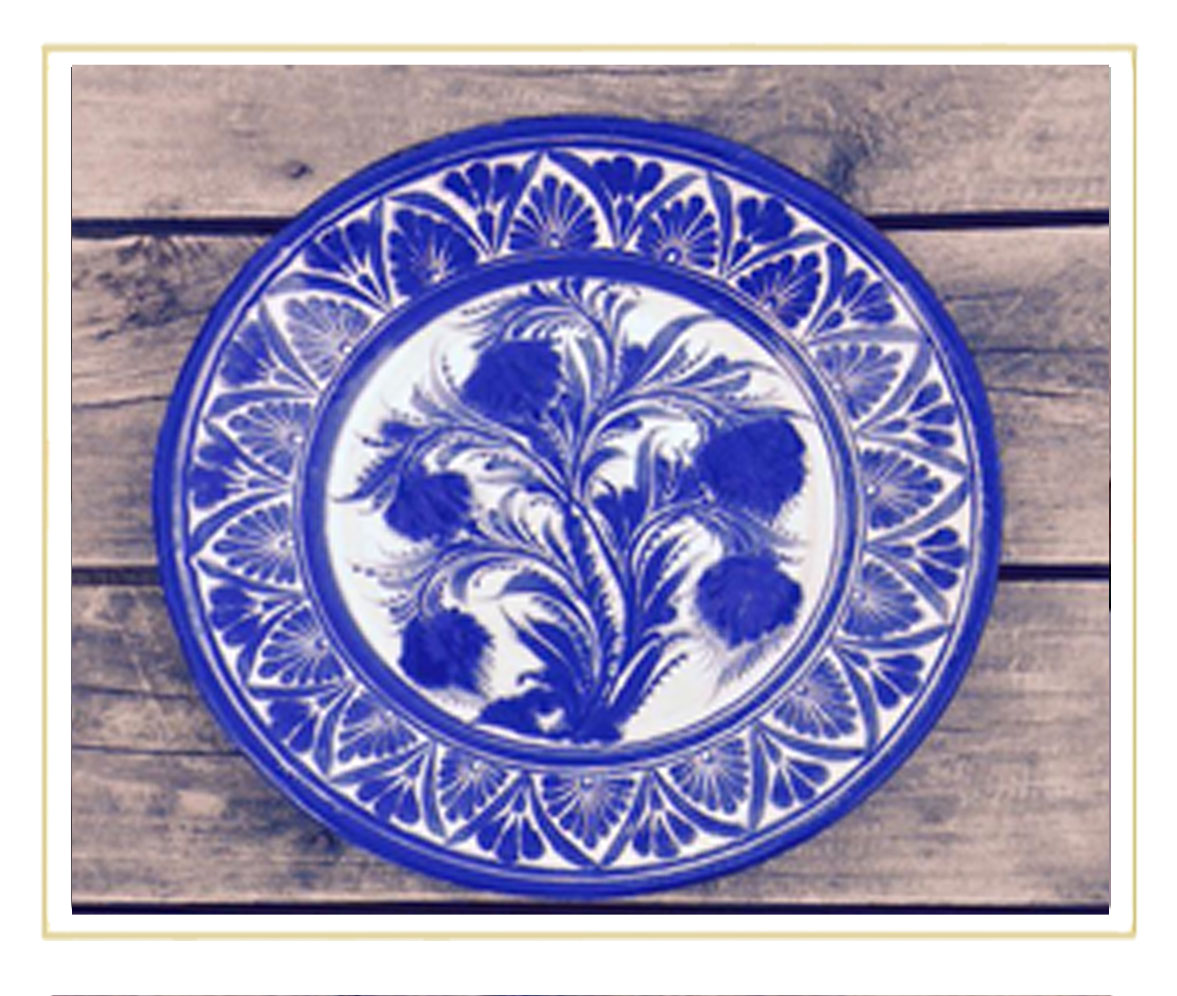 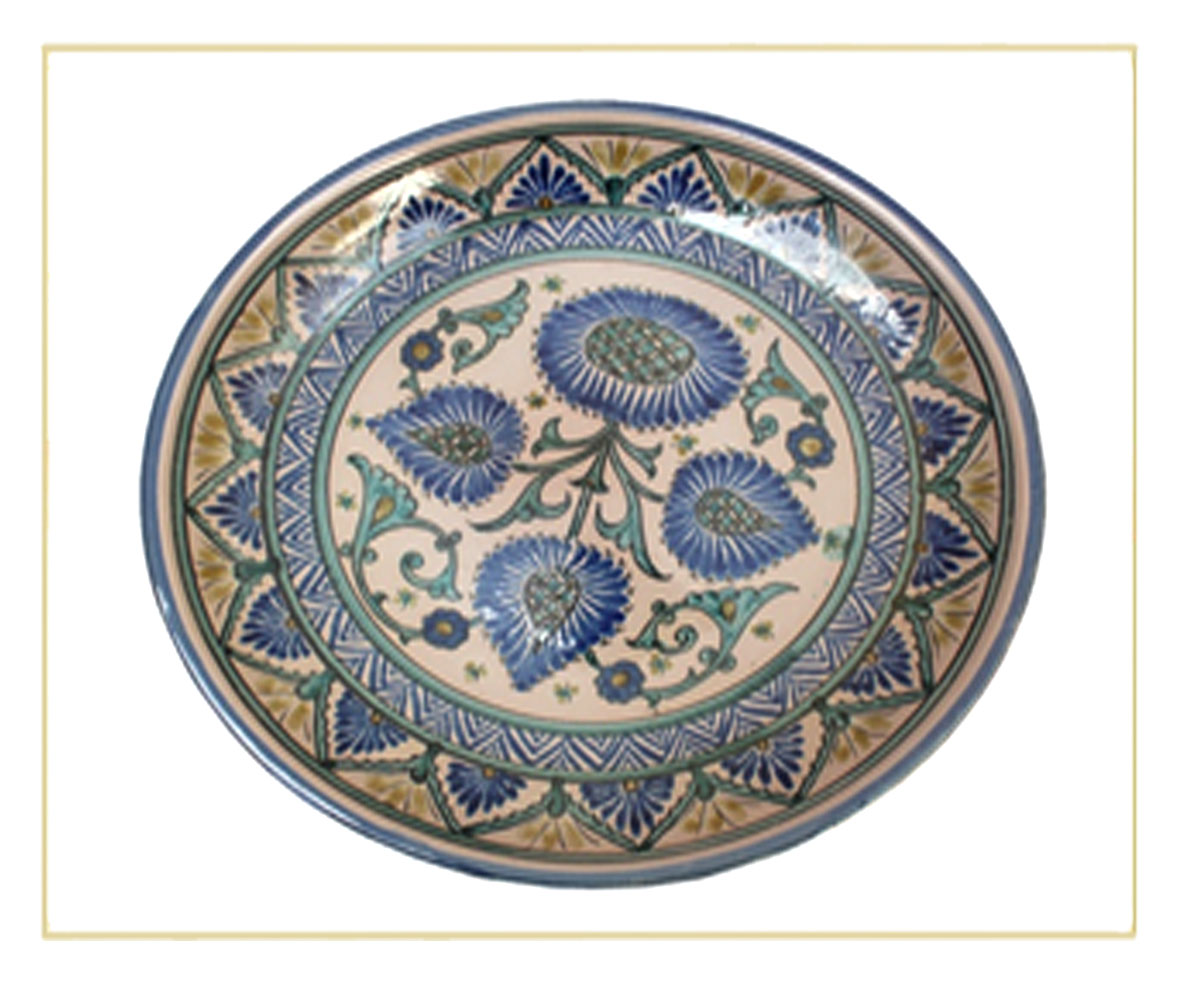 - Rishtan is the name of the legendary ceramic school. In an effort to reduce the incredibly laborious process of manufacture and at the same time to achieve the maximum similarity with the dishes of Rishtan, unscrupulous sellers will be able to forge the traditional "ishkor" dishes? If so, how to distinguish fake from the original?

B. N. - As you rightly pointed Rishtan is a name that speaks for itself. Once I visited  the store in one of the local markets, and  the seller said to me, "Buy the real Rishtan lagan of the famous  master Bahtiyar Nazirov". It was more sad than funny. After all, it is obvious to me, when I see the dishes, made not according to traditional techniques. It will be obvious to you, if you know a few details. Look carefully at the real "ishkor" lagan and will see little playing on the light cracks as little wrinkles on the face of cheerful old lady is a trait characteristic of ishkor glaze. On the duplicate of low quality you will see a perfectly smooth background. No echo of nature,only a thick shiny layer of glaze. By the way speaking of shine. Unfortunately,it is achieved by using sometimes an unacceptable percentage of lead in the preparation of glazes. The maximum permissible rate for ceramics is not more than 20% lead. Excess - is harmful for man. That's why I don't use lead.Whatever of my work may have bought even if one small bowl, let it will be useful in every sense of the word. And if you decide to buy something reflected glare, hopefully it alerted you more than impress.

- Are there other important secrets?

B. N. - I try to put my signature at all the work. And here is another little secret I have. When the first layer of glaze is applied to the lowering it into a bowl, I hold it around the edges with my fingers, and then sent to the first firing. After will be painting another layer of glaze and one more firing. And that's even after that in places where I was holding fingers, there will be my fingerprints. However, barely noticeable, but it will remain. This is my style. Let this not scare you. As well as cracks from river stones is a sign of a manual, multistep work. 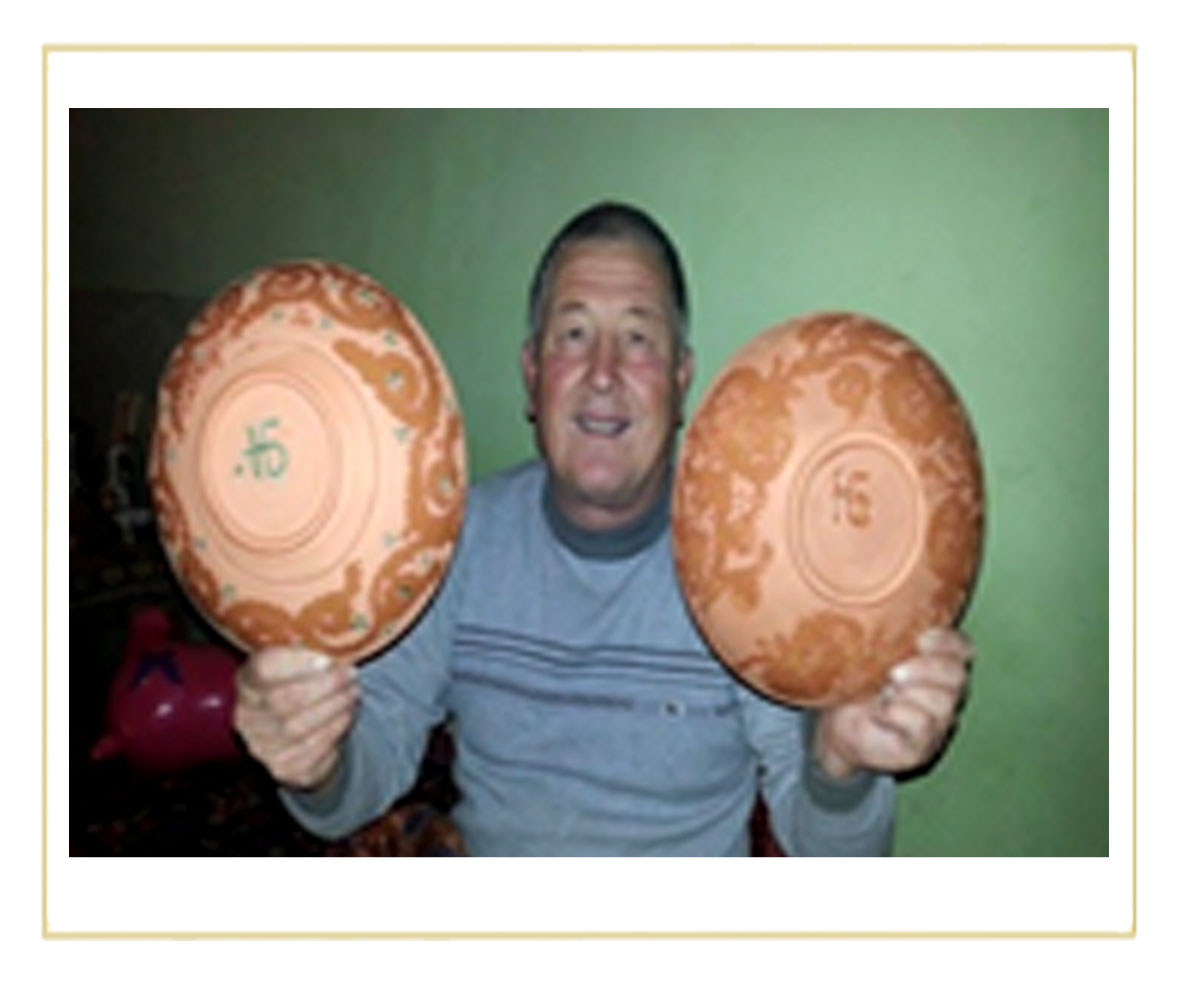 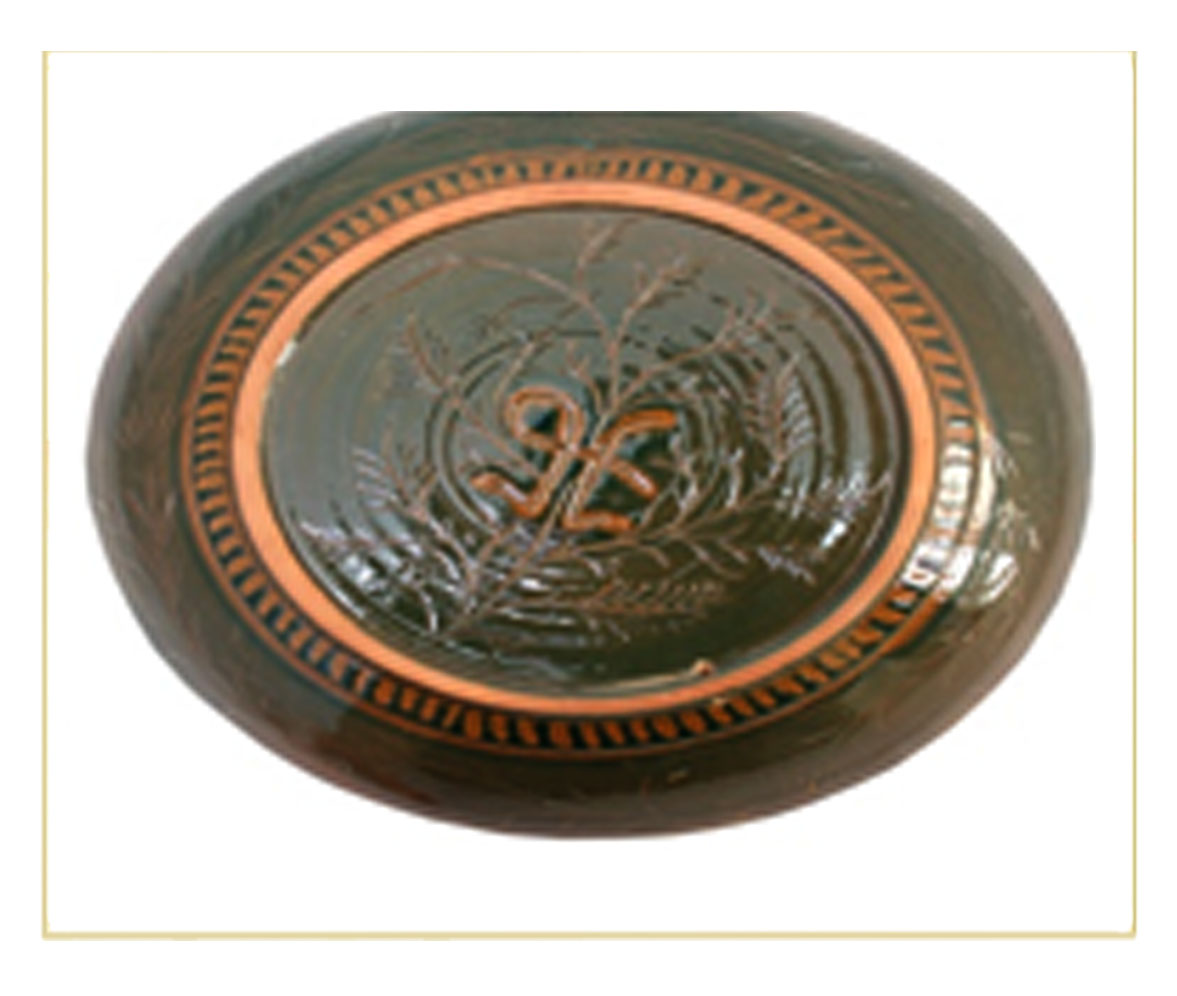 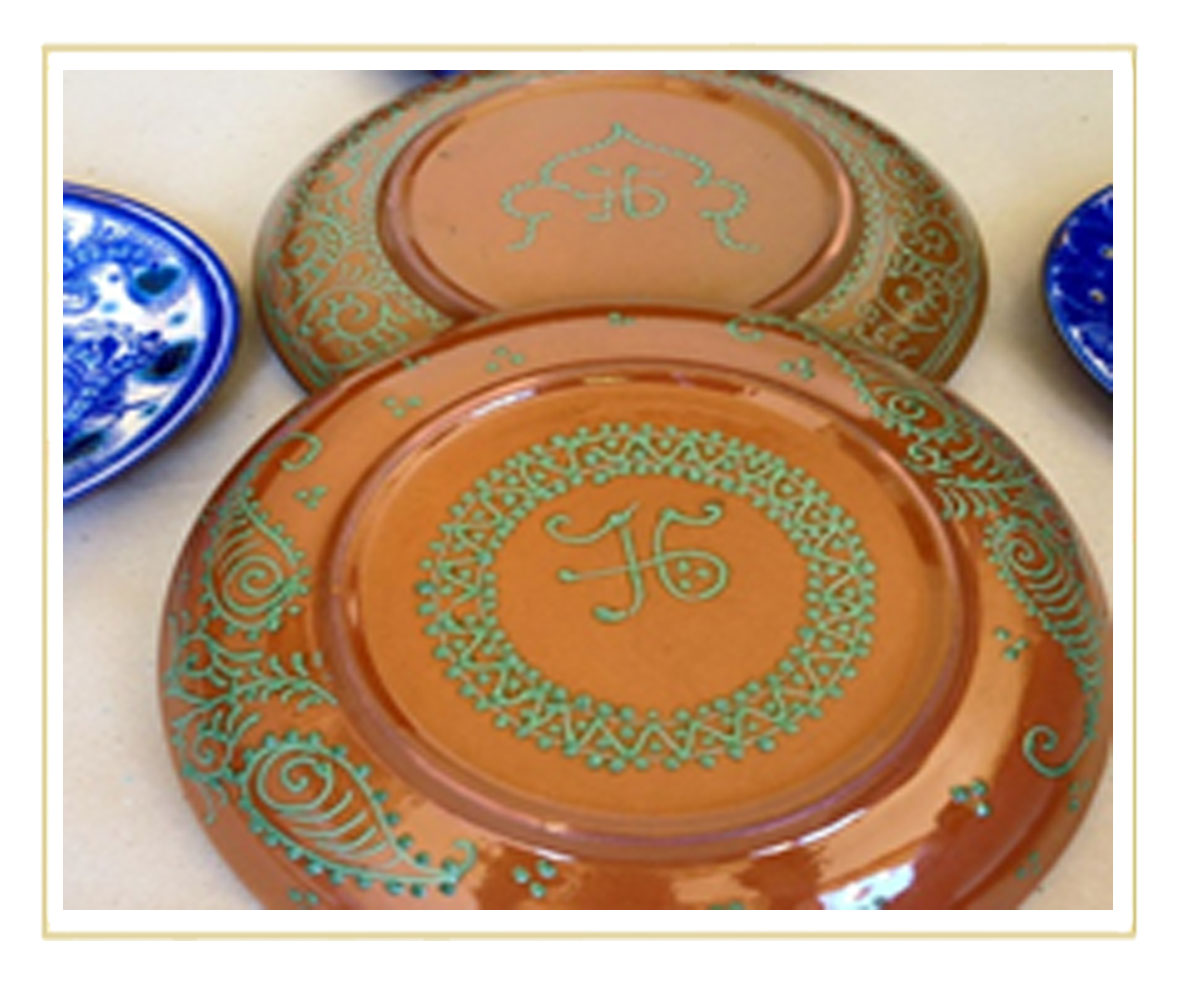 - What is the specific of making "ishkor" ceramic dishes?

B. N. - There are really a lot of nuances. But there is, shall we say, unique features. This is as mentioned above – ishkor glaze. Secondly - this is our unique red clay-Hoki Surkh. It is a living, malleable hears his master and obedient to him. And the technique using the same river rocks,the secrets of proportion and centuries of experience. As you can see, the specificity and uniqueness of the pottery of Rishtan is in its components that we receive from the sun, earth and water-God-given gifts. 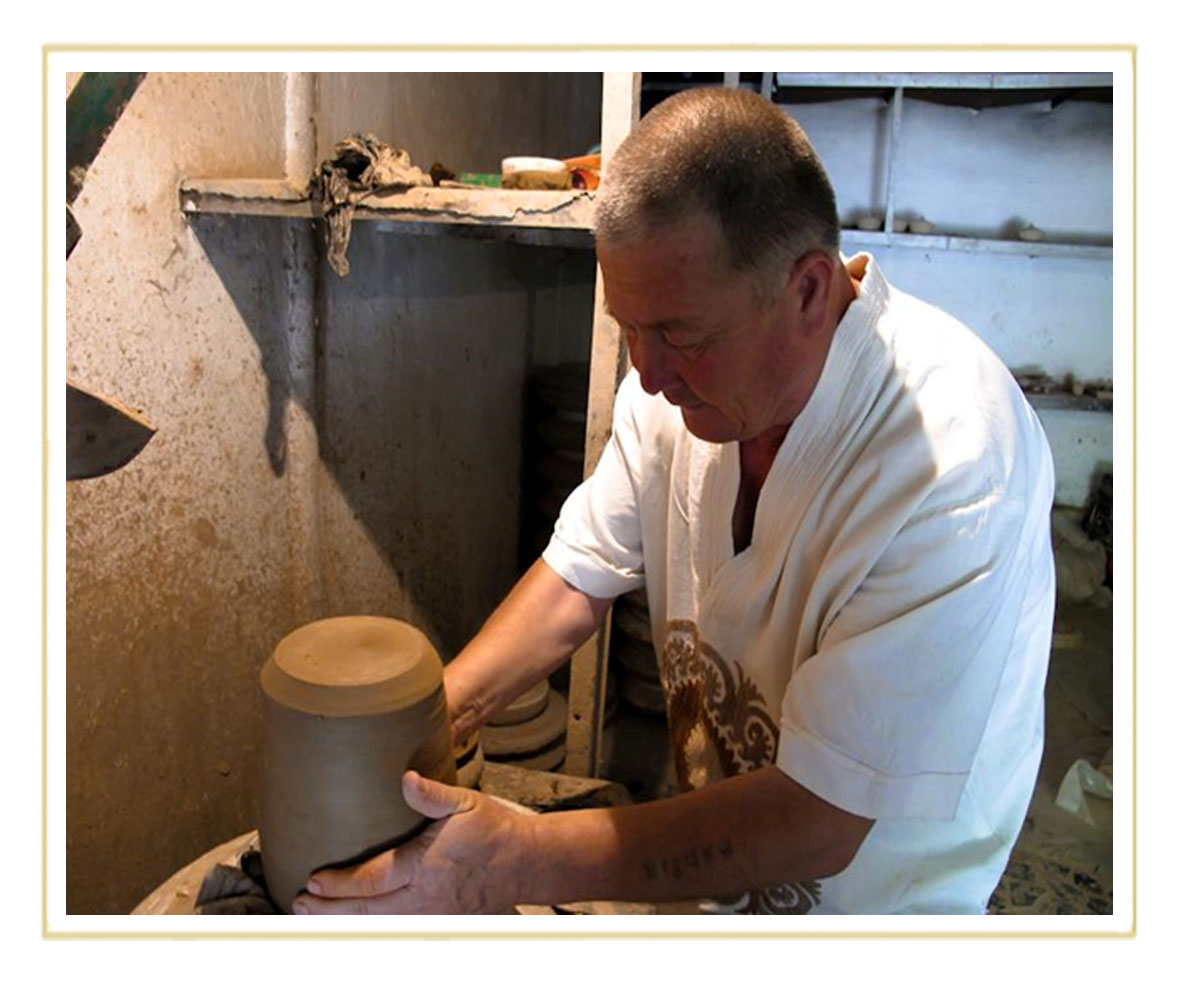 - What's the hardest thing in the manufacturing process?

B. N. - Each phase is responsible and that is the point. But I can say which one is the most unpredictable. It is the roasting.The fact that two dishes equally colored in same mixture of glaze and simultaneously sent into the oven, can get different tone and color. It is sometimes difficult to me explain to customers why of several similar models,one came out well, quite unlike in color to others. Well what can I say? Oven perhaps is as a woman, fickle in their desires.

B. N. – Love to create previously widely used form.They are not popular among young masters. But these forms look so harmonious in combination with a centuries-old technique used by traditional Rishtan masters. Although I must admit I am inspired by different cultures, but something I just think of myself.

The master does not stop on its laurels and travel a lot with his "ceramic family". He is inspired, he meets and disappoints, but it's always an experience for the new creations. The only thing the master is categorical, so it is in compliance with the rules of strict canons in the production of his masterpieces. He just can not, and will not chase the fashion, to seek out the trend colors and forms. He is not like everyone else. He and his dishes, so unique in its kind, made to health of body and soul of man.